Learn some fascinating facts about protected species in the Pacific Ocean and how you can help them. 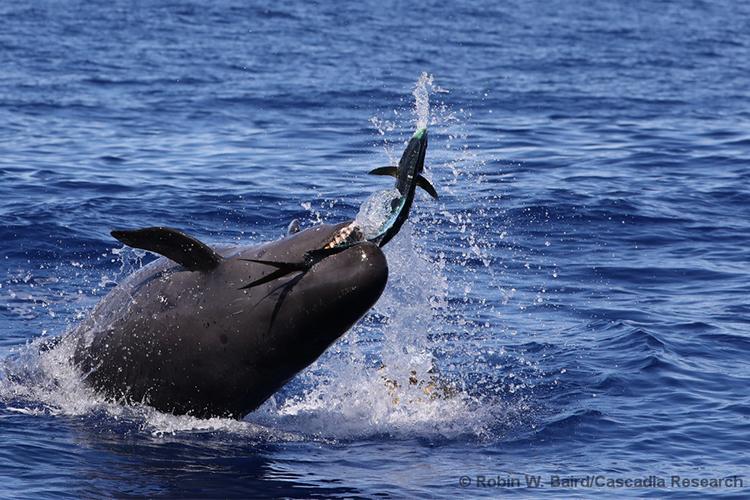 It’s Endangered Species Day! This is a time to celebrate the threatened and endangered species in the Pacific Islands region and renew our dedication to protecting and conserving them! With that in mind, we’re bringing you some interesting—and perhaps surprising—facts about our protected species. We’re and sharing how you can help make sure they’re around for future generations to enjoy.

Here’s why we think the threatened and endangered species in the Pacific Islands region are some of the most interesting animals on the planet!

These closely bonded animals not only share their prey with one another, but they’ve also been known to approach human snorkelers and divers with offerings from their fresh catch.

False killer whales are the least abundant species of toothed whale in Hawai‘i. And of the three populations that live here, the main Hawaiian Islands insular population is listed as endangered with fewer than 200 individuals remaining. While encounters are rare, we encourage you to report sightings at the NOAA Marine Wildlife Hotline: (888) 256-9840.

2. Male hawksbill sea turtles spend their lives at sea and are rarely observed or tagged.

The hawksbill population of Hawaiʻi may be the most endangered turtle population in the world. There are fewer than 200 known adult female hawksbill sea turtles (honuʻea) in Hawaiʻi, but scientists don’t know how many males are out there. They suspect the number may be small because only around 20 percent of Hawaiʻi hawksbills that strand (are dead or injured) on the beach are male. What’s more, incubation temperature determines a hatchling’s sex: high temperatures produce females, suggesting fewer males will be born as global temperatures increase. Report all honu‘ea sightings to RespectWildlife@noaa.gov.

3. Threatened Acropora globiceps coral can range from blue to cream to brown to fluorescent green!

Whatever the color, it’s rare to encounter this threatened shallow water coral across its native range between the west Pacific and the Pitcairn Islands. Climate change is the major threat putting this coral species at risk of extinction.

You can help A. globiceps and many other coral species by:

Make a difference for coral reefs through 10 simple practices

4. The oceanic whitetip shark gets its scientific name, Carcharhinus longimanus, from its long pectoral fins.

The word “whitetip” in the shark’s common name references the telltale smeared white markingson the tips of their dorsal, pectoral and tail fins. But the threatened shark’s scientific name, Carcharhinus longimanus, only describes its pectoral fins—longimanus is Latin, meaning “long hands.” The whitetip’s large, distinct fins are highly valued in the international shark fin trade, one of the threats to their survival. Another major threat for the species is incidental bycatchin commercial fisheries.

Want to help this threatened species? Source your seafood from U.S. fisheries, which are subject to some of the world’s best standards for reducing bycatch.

Learn more about sustainable seafood choices in the Pacific Islands

When a giant manta ray finds a plankton hotspot, they will flip around repeatedly to filter their prey from the water.

Unfortunately, these ancient ocean giants also have some of the slowest reproductive rates of all elasmobranchs, the group of fish that includes sharks and rays. They give birth to just one pup every 2–3 years, which limits their ability to cope with threats. Giant manta rays are both targeted and caught as bycatch in a number of global fisheries throughout their range, which is the greatest threat to their survival. To help recover this threatened species, follow safe handling and release guidelines if you accidentally catch a manta ray. Reduce speed when boating, and keep your distance when observing them to avoid disturbing critical behaviors like feeding and resting. You can also report giant manta ray encounters, which will help us learn more about their movements and habitat use and help inform recovery efforts.

For comparison, the migration distance is about half the trip from Hawaiʻi to California. The turtles travel from their foraging habitats in the main Hawaiian Islands to their nesting habitats at Lalo (French Frigate Shoals) in the Papahānaumokuākea Marine National Monument, and back again. Sea turtle nesting season typically lasts from mid-April through early September.

Though the vast majority of threatened honu nest in the Monument, an increasing number have been nesting in the main Hawaiian Islands (almost 100 nests documented  in 2020). To help protect nesting sea turtles:

Report any suspected nesting activities to the NOAA Marine Wildlife Hotline at (888) 256-9840 or email RespectWildlife@noaa.gov.

7. Monk seals likely made their way to Hawaiʻi between 11.6 and 3.5 million years ago, several million years before the first Polynesian settlers!

Presumably, the seals traveled through the Central American Seaway, a previously existing open water passage between North and South America. Seal hunting expeditions in the mid 19th century reduced the Hawaiian monk seal population to near extinction. NOAA Fisheries’ concerted conservation efforts have helped the species rebound a little, but there are still only approximately 1,400 of these seals left in the wild. Get involved in this endangered species’ recovery: report all monk seal sightings, injuries, and strandings to the NOAA Marine Wildlife Hotline at (888) 256-9840.

8. Leatherback sea turtles are specially designed to feed on gelatinous prey, including jellyfish and salps.

Leatherback sea turtles have sharp-edged jaws, as well as mouths and throats lined with spines, or papillae, to capture and eat soft, slippery prey. Unfortunately, these endangered turtles are unable to distinguish their preferred gelatinous prey from marine debris like balloons and plastic bags, which they sometimes ingest with lethal consequences. Other major threats to survival include bycatch in fishing gear and loss of nesting habitat. Help leatherbacks and all marine life survive by reducing your use of disposable plastics and recycling to keep this hazardous debris out of the ocean.