A View From Inside the Kodiak Lab Aquarium
0 Comments


Take a peek inside the Kodiak Lab aquarium and touch tank to meet some interesting underwater inhabitants! 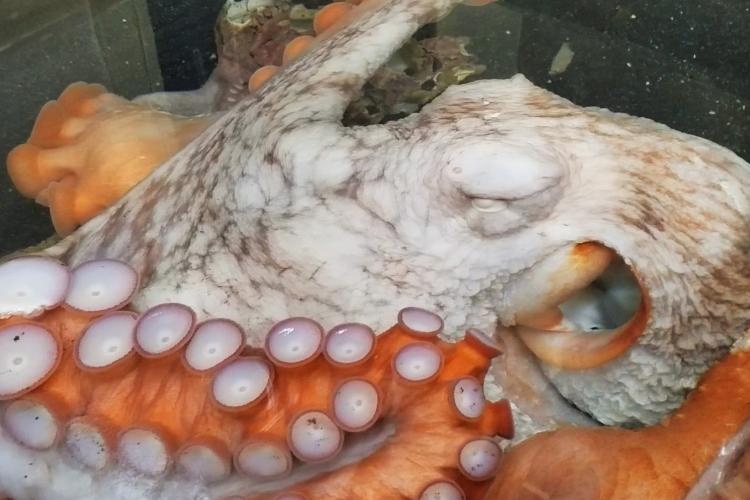 Each year more than 15,000 people visit the Kodiak Laboratory.

One of the biggest attractions is our 3,500-gallon aquarium and touch tank.

Join us as we take our website visitors on a virtual tour to meet some of the unique and fascinating animals that live in our giant ocean tank.

Each month we will highlight a different marine species from invertebrates such as crabs or mollusks to sea stars (echinoderms) and fish.

The Life of Pi (in the Kodiak Lab)
A tour of the octopus enclosure by Joletta Silva, a biological technician working with the Resource Assessment and Conservation Engineering (RACE) team in Kodiak, AK.

We are celebrating Pi (3.14) day a bit late here in Kodiak, as this month’s featured critter is our beloved Giant Pacific Octopus, Pi!  We were fortunate to have had some time to learn about Pi before he was released back into the wild in January, 2021. At the time of his release, Pi was nearly 5 feet long.

Giant Pacific Octopuses are the largest known species of octopus, with an average weight of 30-50 lbs and length of 6-8 feet. They also have the longest lifespan of any octopus species, between 3-5 years. The largest recorded Giant Pacific Octopus was caught in Alaska and weighed over 600 pounds!

Pi is related to a group of cephalopods including squid and nautiluses which are all invertebrates, meaning they have no backbones. Pi, and all other octopus species have eight arms and zero tentacles. The difference between the two is that, in cephalopods, arms have suckers that go all the way down to the end, while tentacles only have suction cups near the end of the limb. These suckers are extremely important sensory organs, and Giant Pacific Octopuses can have up to 240 on each arm (see if you can find a few in the video!). They equip the octopus with an acute sense of smell and touch, and these animals are voracious hunters. Octopuses are carnivores and generally eat anything they can find from snails, to fish and crab. We feed Pi a varying diet of herring and squid, and the occasional leftover king or snow crab from an experiment (his favorite!).

Pi is definitely one of the most charismatic and intelligent creatures we have the pleasure of working with. Each of his arms has its own small brain which allows it to act independently. Imagine if one of your arms or legs had its own brain, and was able to do things without the help of your head! Each arm communicates with the main brain and relays sensory information about the world around it. This means Pi has a total of nine brains! As a result of his intelligence, one of our jobs at the lab is to keep him engaged. We have taught Pi to open jars, and often feed him using puzzles with food inside. He can recognize faces, colors, and has different moods. In the video you will see how he varies in color, usually bright red when agitated or feeding, and he can be extremely pale when resting. These rapid color changes can be used as camouflage, to communicate with other octopuses, or to flash warning signals to predators.