Conserving and protecting sea turtles is a part of our core mission at NOAA Fisheries.

Join us in celebrating these charismatic species and learn more about our conservation efforts from Donna Wieting, Director, Office of Protected Resources.
Read this leadership message on sea turtles

Although most hatchlings emerge from their nests at night, this group of loggerhead hatchlings scrambles into the surf at sunrise. Photo: Witherington – Our Sea Turtles. Blair and Dawn Witherington.

Sea turtles are magnificent creatures. Check out these turtle facts to learn something new about them.

Bycatch is a Serious Threat

NOAA has led numerous efforts to develop ways to reduce sea turtle bycatch and to minimize the harm that results from bycatch. Our efforts have focused on the development of Turtle Excluder Devices (TEDs) to allow sea turtles to escape from trawl fishing nets, development of large circle hook and bait combinations to reduce the capture of sea turtles during longline fishing and, most recently, research to reduce sea turtle bycatch in gillnets by adding lights to the net.

TEDs reduce bycatch in trawl nets, most notably shrimp trawls. A TED is a metal grid that is installed in the trawl near the back end along with a covered escape opening cut into the net. With this net adaption installed correctly, target catch like shrimp pass between the bars and get caught in the net, while large animals like sea turtles bump against the metal grid and escape through a mesh flap. NOAA Fisheries recently expanded TED requirements to part of the skimmer trawl fishery (a different way of fishing for shrimp), this will reduce the number of turtles caught and killed in this fishery. NOAA continues to work with the shrimp industry to ensure TEDs are working properly and to provide outreach and training to the industry.

Illuminated Nets Could Provide A Brighter Future For Sea Turtles

The first testing of lighted gillnets began about a decade ago. Testing has continued using different types of lights and different configurations of lights on the gear.  Observed decreases in the number of sea turtles bycaught suggest that illuminating gillnets may be an effective sea turtle bycatch reduction tool for certain gillnet fisheries that operate at night.

Species in the Spotlight

Of all the species NOAA Fisheries protects under the Endangered Species Act, we are shining a spotlight on nine species that are among the most at risk of extinction. Most of these species are threatened by human activities such as bycatch in fisheries, habitat destruction, vessel strikes, entanglement in marine debris,and ocean noise. Our Species in the Spotlight program is aimed at stabilizing these species, and bringing them back from the brink of extinction.

Learn more about the Pacific leatherback sea turtle, a Species in the Spotlight

Decoding hatchling DNA allows us to understand the hatchling’s family history, including who its mother is, who its father is, and to what nesting population it belongs. These clues are helping scientists unlock the secrets of where population boundaries are, where to focus conservation efforts, and what threats might be population specific. 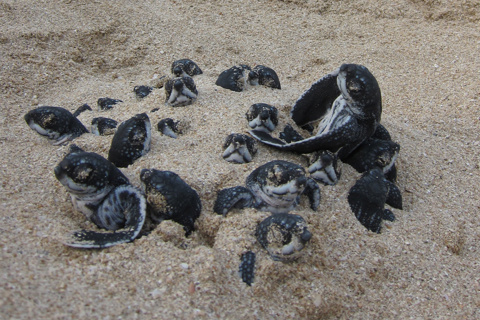 Leatherback hatchlings beginning to emerge from the sand.

Hawksbill turtles are an endangered species. Once abundant, they were killed in large numbers over the past hundred years for their shells, used to make “tortoise shell” jewelry and trinkets. This large scale killing of the species nearly drove the population to extinction. Today, the Convention on International Trade of Endangered Species (CITES) forbids the trade of any turtle products on the international market, including the “tortoise shell” from hawksbill turtles.

Hawaiian Hawksbill Turtles: One of the World’s Most Endangered Sea Turtle Populations
Scientists are focusing their research on the Hawaiian hawksbill sea turtle in an effort to bring back the endangered population and are making some new discoveries.

Saving Sea Turtles: How You Can Help

From protecting beach habitats to reporting sick or injured turtles, learn what actions you can take to help save sea turtles.

Learn what you can do to save sea turtles

Share five ways you can help sea turtles with your friends