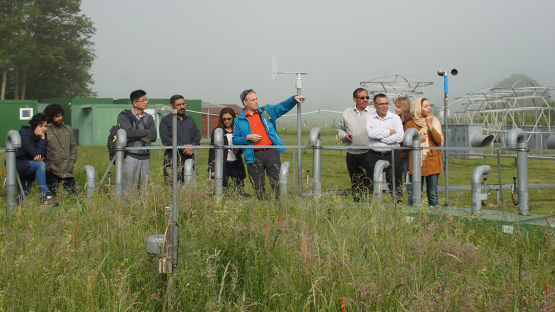 Ways to reduce greenhouse gas (GHG) emissions from agriculture under different climatic conditions have been identified, thanks to a research project coordinated by the IAEA, in cooperation with the Food and Agriculture Organization of the United Nations (FAO). Using isotopic techniques, scientists from around the world have developed technology packages that countries can use in climate change mitigation efforts by making more efficient use of water and nutrients.

When farmers apply fertilizer to their crops, plants convert the fertilizer into the nutrients the plants need to flourish. Some of the by-products related to these processes are released as GHGs such as nitrous oxide (N2O), carbon dioxide (CO2) and methane (CH4), and the overuse of fertilizer is leading to the release of excessive amounts of GHGs. According to the FAO, agriculture, forestry and other land use make up close to a quarter of GHGs, and the use of synthetic fertilizers accounts for 12% of total agriculture GHG emissions.

These gases, in turn, trap heat in the Earth’s atmosphere, contributing to global warming and thereby altering the conditions under which food crops grow, affecting not only crop yields, but also food quality and food security.

“The release of large amounts of N2O is particularly worrying because it’s 300 times more powerful than CO2 in trapping heat, and 16 times more powerful than CH4,” said Mohammad Zaman, a soil scientist at the Joint FAO/IAEA Division of Nuclear Techniques in Food and Agriculture. “Increasing nitrogen efficiency in farming and stopping the escape of nitrogen from soil can therefore greatly contribute to climate change mitigation strategies.”

To optimize agricultural practices, scientists from 10 countries – Bangladesh, Brazil, Chile, China, Costa Rica, Ethiopia, Germany, Iran, Pakistan and Spain – along with experts from the IAEA and the FAO, used isotopic techniques to identify factors that influence GHG emissions from farmlands during a five-year period, which ended in July 2019. The experts used the stable isotopes nitrogen-15 and carbon-13 to identify sources of N2O and CO2 emission, as well as to study the accumulation of carbon and nitrogen under different land uses (see Tracking greenhouse gases with stable isotopes).

One of the aims of this project was to investigate the suitability of so-called nitrification inhibitors as a GHG mitigation option. These inhibitors are added to nitrogen fertilizers to reduce N2O emissions. “A major strength of this project is that we could do these experiments in different climate systems, be they temperate, tropical, or dry. This is important, because soil processes and therefore mitigation strategies are different for each of these regions,” said Zaman.

In Brazil, one of the largest agricultural producers in the world, farmers are producing enough food to feed five times the country’s population, so understanding the role of inhibitors in decreasing nitrogen loss is very important, said Segundo Urquiaga, a researcher from the Brazilian Agricultural Research Corporation. “Urea is the main source of synthetic nitrogen in Brazil, and our results from this research project are very promising because we demonstrated that farmers can decrease urea use while increasing nitrogen use efficiency by using these inhibitors,” he said. “Therefore, more nitrogen can remain in the soil, minimizing the release of N2O.”

However, synthetic fertilizer makes up less than 20% of the total amount of nitrogen used in Brazilian agriculture, according to Urquiaga. “Over 75% comes from biological nitrogen fixation, which is the process of plants converting atmospheric nitrogen into the kind of nitrogen they need to flourish,” he said. “So, nitrogen-15 technique was essential for us to determine which crops have high biological nitrogen efficiency. Thanks to this initiative, we now know that we no longer need to use nitrogen fertilizer for soy bean crops, the main crop in Brazil.”

Similarly, researchers in Spain studied nitrogen loss from cropping systems by quantifying the emission of ammonia, a gas released during the breakdown of the nitrogen in fertilizers, which can contribute to GHG emissions.

“Our research has confirmed the potential of urea inhibitors to mitigate ammonia emissions,” said Alberto Sanz-Cobena, researcher at the Center for Studies and Research for the Management of Agricultural and Environmental Risks at the Polytechnic University of Madrid.

Isotopic techniques are a unique tool in this field of research, said Christoph Müller, Professor of Plant Ecology at Justus-Liebig University in Giessen, Germany.

“To devise strategies to stop GHGs, we need to know where they are coming from, and isotopic techniques are the only methods available to quantitatively analyze GHG production processes in soil – telling us both the source and amount of each gas emitted,” he said. “Thanks to this research project we now have information that is crucial for reducing soil carbon depletion and enhancing soil carbon and nitrogen capture and storage in different climatic conditions. To implement these strategies, however, we need scientists to work hand in hand with farmers.”

Nuclear techniques offer substantial advantages over conventional techniques for measuring GHG emissions. By adding nitrogen fertilizers labelled with stable isotope nitrogen-15 as a tracer, scientists can track the isotopes and determine how effectively the crops are taking up the fertilizer. The isotope is also used to quantify the amount of nitrogen that crops can acquire from the atmosphere through biological nitrogen fixation process.

The carbon-13 stable isotope technique, using the natural abundance of carbon-13 in the environment, allows researchers to evaluate soil quality and sources of carbon sequestered in the soil. This helps identify how various combinations of crop rotation, tillage and ground cover can enhance productivity and improve the efficiency with which increasingly scarce resources, such as water and chemical nutrients, are used. Carbon-13 is tracked to determine the movement and origin of carbon dioxide and methane.