Carbon emissions from waste disposal are increasing because of the expansion of energy-from-waste incineration plants, a coalition of campaigners has warned.

By 2030 the government’s push to increase incineration of waste will increase CO2 emissions by 10m tonnes a year, mostly from the burning of plastics, the groups said. They argue that the growth in energy-from-waste incineration means the UK will not be able to meet its commitment to net zero carbon emissions by 2050. 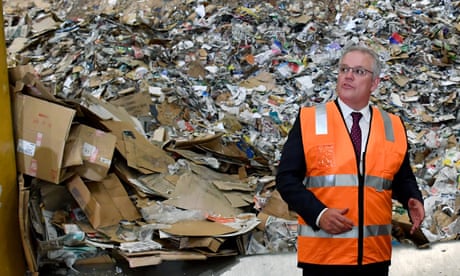 The coalition, which includes Extinction Rebellion’s zero waste group, Friends of the Earth, the UK Without Incineration Network (UKWIN), Greenpeace and the MP John Cruddas, says the expansion of waste incineration is forcing up carbon emissions.

In an open letter to the prime minister they are calling for a law requiring the waste sector to decarbonise by 2035, similar to legislation passed in the Scandinavian countries and Finland.

Rembrandt Koppelaar, an environmental economist and co-author of the open letter, said: “The UK will not be able to deliver on its net zero commitments unless the government intervenes in the waste sector.

“Without a change in government policy, we can expect large-scale expansion of energy-from-waste incineration to lock us into an additional 10m tonnes of CO2emissions per year by 2030, primarily from the burning of plastics.”

The amount of waste incinerated in the UK increased from 4.9m tonnes in 2014 to 10.8m tonnes in 2017-18 and is set to continue rising. Meanwhile, recycling rates have reached a plateau and the UK is expected to miss its 50% recycling target by the end of this year.

Evidence presented to MPs last year suggested that areas that had increased levels of incineration of waste had correspondingly lower levels of recycling.

The Guardian and Greenpeace revealed that incineration plants are also three times as likely to be situated in the most deprived and ethnically diverse areas of the UK, raising concerns about the impact on air quality and the health of vulnerable people.

There are 50 incinerators planned or in development in the near future.

Government figures show that in 2018-19 nearly half (43.8%) of waste collected by local authorities from households in England was burnt, or 11.2m tonnes. This increased from just over 12% a decade earlier, and meant incineration overtook recycling and composting as the largest single municipal waste management method. 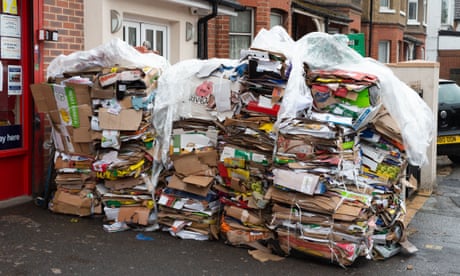 Incineration rates in England varied from below 30% in the south-east to almost 60% in London. In Wales, rates of incineration were 25.1%.

The government appears determined to press ahead with increases to waste incineration. In the December 2018 resources and waste strategy, published under Theresa May’s premiership, the government said: “Incineration currently plays a significant role in waste management in the UK, and the government expects this to continue.”

Koppelaar said: “The past decade has witnessed a rapid expansion of energy-from-waste incineration capacity, which has already led the sector’s carbon impact to reach 7.4m tonnes. Last year waste incineration gave rise to 13% of the greenhouse gas emissions associated with electricity generation, even though it provided only 2.4% of the UK’s electricity.”

Dr Anne Velenturf, from the Resource Recovery from Waste academic research programme, said: “Building energy-from-waste plants now, when we need to decarbonise, is inconsistent with the Paris agreement and the UK’s legally binding net zero commitments. Ministers must consider whether planned construction of incinerators is compliant with climate obligations, otherwise the government effectively inhibits the decarbonisation of the UK economy.”

The signatories of the letter are calling for:

News is under threat …

… just when we need it the most. Millions of readers around the world are flocking to the Guardian in search of honest, authoritative, fact-based reporting that can help them understand the biggest challenge we have faced in our lifetime. But at this crucial moment, news organisations are facing a cruel financial double blow: with fewer people able to leave their homes, and fewer news vendors in operation, we’re seeing a reduction in newspaper sales across the UK. Advertising revenue continues to fall steeply meanwhile as businesses feel the pinch. We need you to help fill the gap.

We believe every one of us deserves equal access to vital public service journalism. So, unlike many others, we made a different choice: to keep Guardian journalism open for all, regardless of where they live or what they can afford to pay. This would not be possible without financial contributions from those who can afford to pay, who now support our work from 180 countries around the world.

Reader financial support has meant we can keep investigating, disentangling and interrogating. It has protected our independence, which has never been so critical. We are so grateful.

We need your support so we can keep delivering quality journalism that’s open and independent. And that is here for the long term. Every reader contribution, however big or small, is so valuable.Support The Guardian from as little as $1 – and it only takes a minute. Thank you.